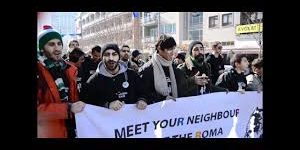 Time and Date of the event : 13.00h, 19thFebruary 2012
Place: Prishtina, Mother Theresa Street (the square behind the book sellers)

“Dosta”, a Romani word meaning “enough”, is awareness raising campaign which aims at bringing non-Roma closer to Roma citizens. “Dosta” means that we want to stop prejudices and stereotypes not by denouncing them but by breaking them, showing who the Roma really are.

The Dosta! Campaign started as part of a wider Council of Europe/European Commission Joint Programme “Equal Rights and Treatment for Roma in South Easter Europe” and has been implemented in Albania, Bosnia and Herzegovina, Montenegro, the Republic of Serbia, and “the former Yugoslav Republic of Macedonia”, during 2006 and 2007. Launched as a regional campaign, “Dosta!” raised the interest of other Council of Europe Member States. Consequently, in 2008-2009, it is launched in Ukraine and Moldova, as well as opened to partnerships in other Council of Europe member States. Thus, Italy, Romania, Croatia, Slovenia have joined the campaign in 2008, followed by Latvia in January 2009 and Bulgaria and France in April 2010.

Finally, in October 2011, Dosta! Campaign is launched in Kosovo, with the support of NGO GAIA – peace organization working in a field of peace promotion, understanding and solidarity between people, social justice, sustainable development and respect of environment.

As follow-up of the Dosta! Campaign GAIA invites people to take a part in the Flash Mob, simple, powerful and VISIBLE ACT to show that we will not longer tolerate discrimination and exclusion of our neighbors, friends or ourselves. The event will take a place on Sunday, 19th of February, at 13h on Mother Theresa Street (the square behind the book sellers). Gathering starts at 12.30h and at 13h people will start walking down the Mother Theresa Boulevard wearing the T-shirts with the slogan ‘’ Meet your neighbor, meet the Roma!’’. T-shirts will be provided.

Join us in this action and help us to fight prejudices and claim for our rights and the rights of others! For further information please contact:

Volunteering to give and receive – The story of Lorraine
November 25, 2020