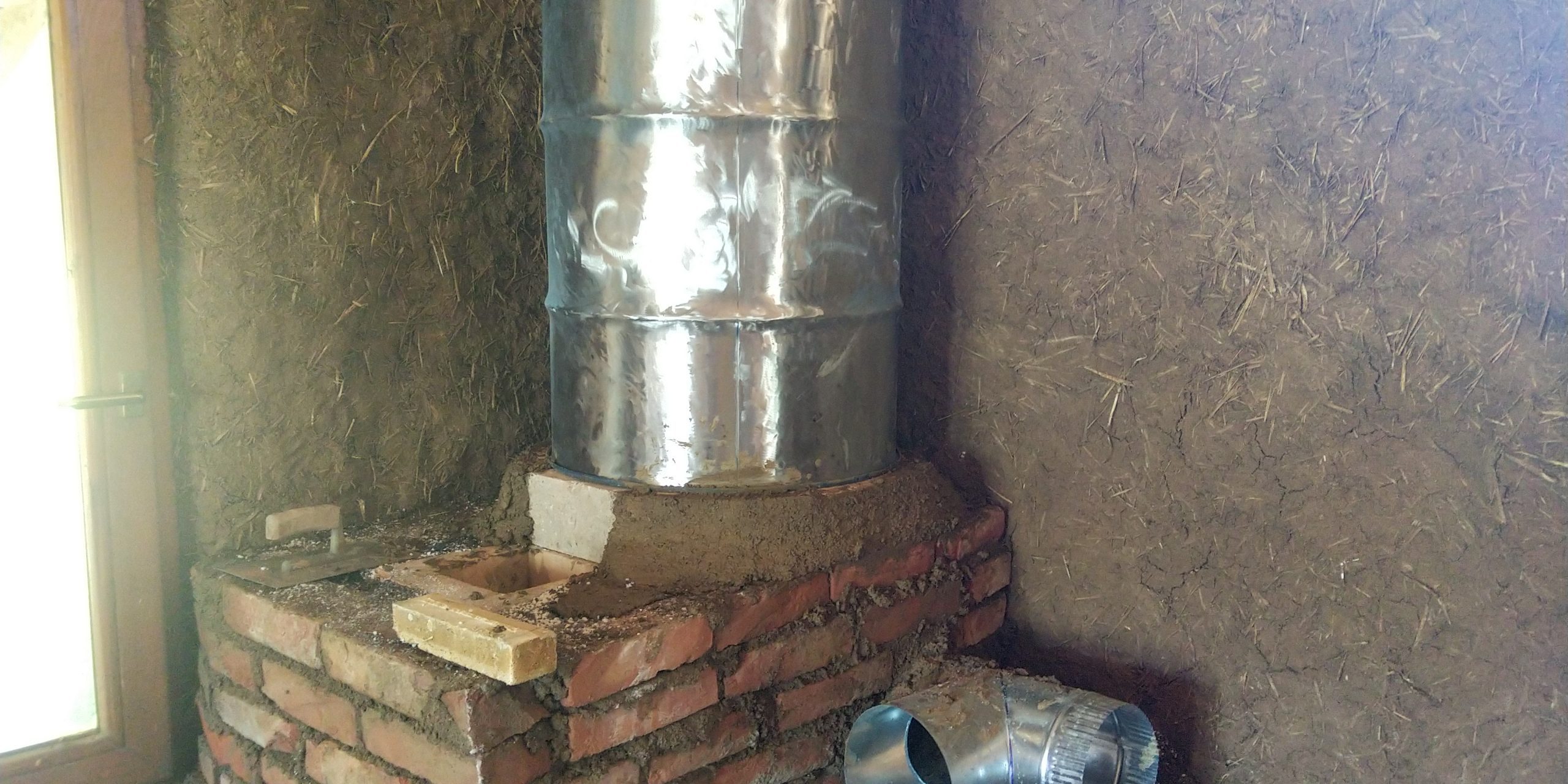 Last week was a workshop about Rocket mass Heater and energy efficiency, it took place in Boževce permaculture estate with 15 other participants

What is a Rocket Mass Heater, What is a rocket stove ?

A Rocket Mass Heater is an energy efficient stove, mostly made of natural materials. The fireplace is insulated and dimensioned to create the best combustion as possible which would in other words mean that the draft is really strong and stable, and that all the wood put inside reaches around 98% of combustion (65% on normal wood stoves). And this strong heat is maintained (thanks to perlite insulation) till the top of a metal barrel which radiates the direct heat.

But then, instead of bringing the heat that is left with all wood particles combusted, it makes sense to make the chimney (which in this case is called thermal battery) wander around the space. So then it is usually shaped as a bench, wall… but it can also go under your bed or bath tub… 😉 Because what happens in this thermal battery ?

The heat radiates in the chimney (most likely a metal pipe) and then transfers into the bench; done of a big mass ( clay and sand mortar, concrete leftovers…), and this heat travels slowly so it is somehow stored inside the battery! So the bigger the mass, the bigger heat storage you can get!!!

Which means that because of the combination of strong combustion and incredible storage unit. You would burn efficiently your wood without waste, but then you would also store all the heat created from this combustion.

Let’s talk in numbers: for 3/4 hours of combustion/fire, the thermal battery (metal pipe covered of mass) would release heat up to 30 hours. In this case you drastically reduce the amount of wood per winter. With a rocket mass heater, the amount of wood for a stable temperature all winter would be around 2 or 3 cubic meters of wood.

We had a workshop with internationals and locals, leaded by Pero from ZMAG, expert in Rocket Mass Heater and natural builder about how to build a Rocket Mass Heater. This experience took place in Boževce/ Bozhefc

15 people from this world came in the project to learn about and build a Rocket Mass Heater for 5 days in October.

Before the workshop together with Pero we agreed and designed the Mass Heater to be on the north wall of the house to protect it from cold, it will be shaped as a bench and then a wall to be able to get as much mass as possible 😀

The first evening, sitting on a Mass Heater built previously, all participants could be taught on the functioning of the stove. What makes it so good and efficient like I mentioned before, and we could spend much more time talking about how good is this heating system but let’s talk about what happened the next day!

People gathered around the perlite (expanded clay) foundation where the combustion unit will stand and started to build it.
Many hands and energy was put throughout the process even though this part needs to be really really (REALLY) precise because that’s where the burning happens: we are talking about temperature going around 1000 °C. It is not to be discouraging but if ever you want to build a Mass Heater think about safety first.

Thankfully Pero showed us the best way to be safe, and his passion and experience are obvious!

Next day was already time to set up the thermal battery. Which we would start by installing metal pipes that trap and conduct the heat directly into the mass. It is a playful job, full of sparkles cutting pipes, connecting them and starting to see the shape of a comfortable and delightful space.

While setting up the pipes on the other side of the straw bale wall other participants of the workshop were finishing to plaster the second layer of earth mix of the whole house. Still under the eye of the joyful Ružica from Belgrade that was leading the previous workshop on earth plastering and natural building!

Saturday was about putting the mass on the finalized chimney, we could not shape the whole bench because the mass is mainly made of sand an clay mortar, so it would collapse if the amount is to big, first layer has to dry. In the month of November we will certainly finish the mortar layer and add a smoother mix to get it nice and comfy. Dedication and energy was taking place in a great weather (even though it is scary to notice that October is so warm…) and it made the energy of the participants even stronger. Jokes and good talks gets the work to be always nicer and then, when the mass heater will be done sitting on it will be also remembering how many hands where put into setting up what will soon be a sleeping place and a educational space for people to come and learn about permaculture, natural building, and many other environmental related topics.

Building with Nature in Mind is an EU funded project managed by the European Union Office in Kosovo and supported by BGF and INDEP.