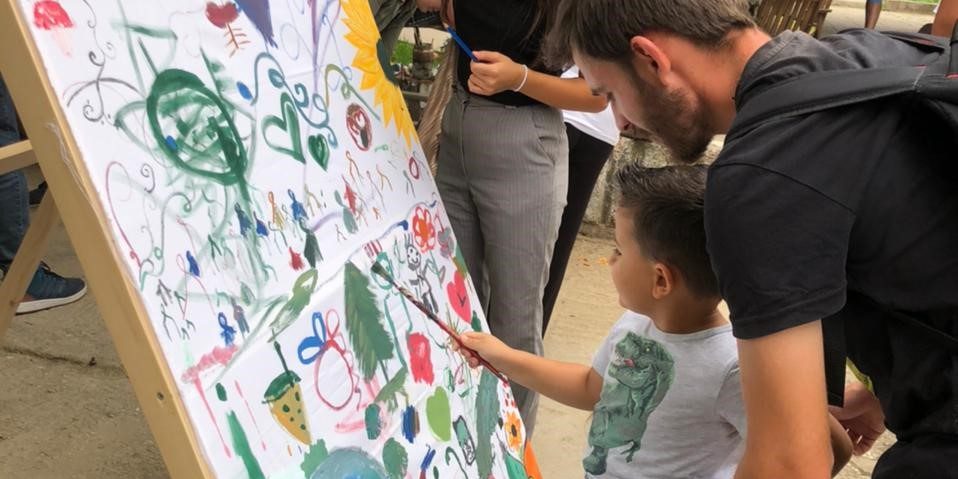 A One Day Festival to Celebrate Art

In the old Craft Center of Mitrovica, just behind the Balkan sweet-shop, there is a little colorful yard with two tall trees making shade during these hot summer days. It’s in this place that the volunteers of the Mitrovica program of GAIA Kosovo decided in October 2020 to open a social and cultural place called “Social Space for Deconstruction”, where exhibitions, workshops, concerts and screenings are organized. They discovered that in this hidden part of the city, three of their neighbors, a painter, a cobbler, and a tailor, all shared a passion for the art of painting. It seemed natural to celebrate this beautiful coincidence by bringing people together on a special Sunday fully dedicated to art.

Skender Idrizi, one of those three painters, said one day that art is an international language, and no matter if you cannot verbally communicate with someone, you can always exchange and create together. This is particularly relevant in the context of Mitrovica and art being a good way to connect people, GAIA volunteers, along with some young local volunteers, decided to organise an “ArtFest”, with the specific theme of “Things in Common”.

Why this theme? Because when people live their day to day life in a divided city, they sometimes need to rethink about what we, as Humans, have in common.

The ArtFest started around 10 in the morning and finished in the late afternoon when the jam session turned into an improvised concert for the passerby and the community of the neighborhood. The morning was fully dedicated to activities with children supervised by Skender Idrizi for the painting and Eglantina Avdiu for Clay modeling.

The space became rapidly full of happy children running everywhere with paint in their hands. It was beautiful to see this usually quiet place suddenly full of joy and movement. Moms and dads painting with their children, older generations working on pieces of art with younger ones, girls and boys sharing brushes and laughter, all this contributed to a nice atmosphere where all generations and genders created together.

While Skender was splashing paint on large white canvas with children and teaching them some technics, Shukri Pepiqi and Sahadete Hajrizi, the two other neighbors with the painting “fever”, where enjoying to draw wonderful landscapes on their own, taking a break from their work of the week.

Two big sheets were installed on a wooden structure to create the opportunity for people to express collaboratively their visions of what they think we all have in common.

In another corner Eglantina was teaching children how to make sculptures and designs from clay, that, once dried, were painted with many colours.

Everything was a bit chaotic to organize but in the end, people called it a success and everybody was happy with the results.

The afternoon was organized in a different way, children went back home with their pieces of Art, or left them at the Social Space, and the area soon became a place where young adults and teenagers played music together. Among these youngsters, were the members of the young band from Mitrovica “Echo”. Everybody who knew how to play or sing was invited to participate in the jam/concert.

Later, two painters from Lepina, Farija and Bajram Mehmeti joined the ArtFest and helped a member of GAIA to paint his first poppy. They also painted beautiful paintings that they nicely offered to the SSD.

At the end of the day, everybody went home feeling more in touch with their artistic side and closer to one another.

This article has been written by Faustina Tissier, a long-term volunteer of GAIA in Mitrovica, Kosovo. Faustina has been volunteering in Mitrovica since September 2020 through the French national volunteering programme “Service Civique”. She will end her mission this year in September.