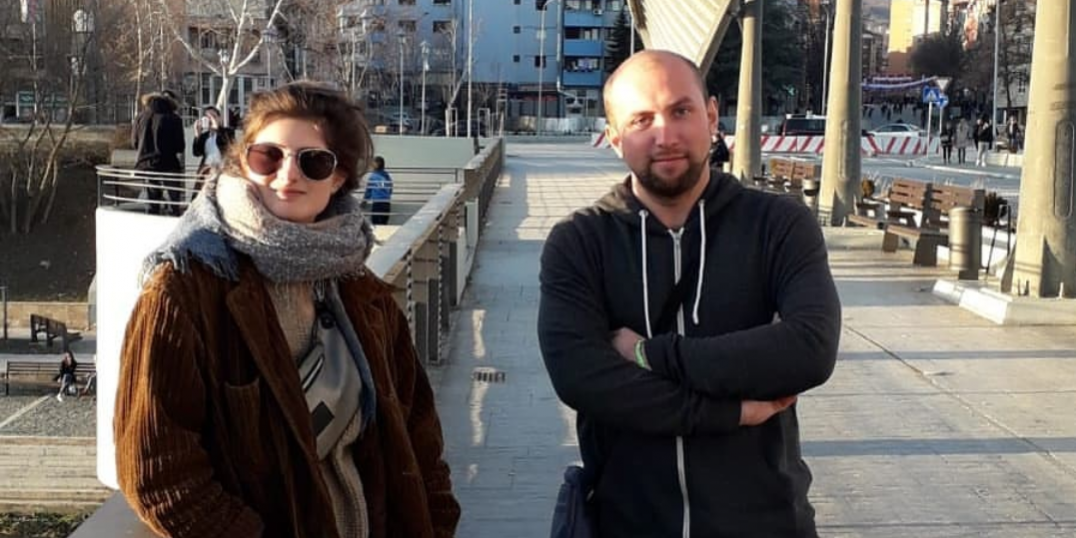 The stories of Célia and Hugo, volunteers in GAIA’s Mitrovica program

In February 2019, Hugo and Célia, two French volunteers, joined the program of GAIA Kosovo in the ethnically divided town of Mitrovica. For one year, they became active members of the GAIA team, contributing to organize various events and workshops, or creating partnerships on both sides of the city. Asides from their activities in Mitrovica, they also had the opportunity to discover Kosovo and the region. Learn more about their experience and lives as volunteers.

At the end of my studies, I could choose between two volunteering programs; one in Kosovo, and the other one dedicated to increase cultural partnerships between France and Russia. The latter would have been completely in line with my studies and my plans on how my future carrier should look like.  However, I did not hesitate one second when choosing to join the peace-building mission in the divided town of Mitrovica in Kosovo. Part of my decision was based on the excitement to explore a different country and culture that I knew nothing about… Most importantly, it was the certainty that I would learn and gain a completely unexpected knowledge by going there.

I arrived with expectations, built up by what I had previously read about the city. It was of course different from what I expected. In the Northern part of the city, I had the feeling to be back in Russia and not only because there are pictures of  Putin everywhere, but because of the same slavic feeling that is so familiar to me now. In the southern part, I had the impression to step into an oriental world where days are shaped by the calls to prayer every few hours. Beyond this first impression of two worlds combined into one town and this division between Serbs and Albanians, Mitrovica is also a surprising city, with its small hidden Kafanas, its “neutral neighborhoods” where people from all communities; Bosnians, Roma, Ashkali, Serbs, Albanians sometimes meet and exchange.

I discovered that GAIA’s program in Mitrovica goes beyond the political issues that divide communities. GAIA strives for a more genuine and comprehensive approach and answer to the different concerns affecting people’s lives no matter the ethnicity (such as the lack of cultural opportunities, or the absence of communications between communities), and tries to gather people with this idea in mind. It also comes with this modesty that is so important to me, meaning that you don’t arrive in a place and start building a project without taking into consideration people’s needs and desire. In Mitrovica, every GAIA project is a careful step-by-step process, which allows to shift perspective without brutalizing people. We chose to focus on culture and environmental awareness, organizing events and workshops in both sides of the cities. During this year, we created a rooftop urban garden, planted trees, organized storytellings events, covered with street art hateful messages written on the main bridge dividing the city. Quite a busy year!

GAIA’s actions are guided by the permaculture principles (Earth care, People care and Fair share), which we try to apply to our garden as much as to our social interactions and our way to take care of things surrounding us. I found meaning in this philosophy. Before this experience, I had not  thought about how environmental degradation and injustice impacting people’s lives, health and living places could actually bring people together. When there is no fish in the river anymore, when the waste management is not ensured, when families are dealing with chronic diseases because their lands are contaminated by industrial chemicals; ethnicity does not matter so much anymore because everyone is facing the same issues. This is one important lesson of this volunteering experience : taking care of nature is a factor of peace since it implies to take care of all  things and living beings in general.

I enjoyed meeting people from all communities, and listened to their stories without judgments and questions. I enjoyed learning how to plant seeds, grow your own garden, and appreciate that it takes time. I completely loved organizing activities in Mitrovica, even though it was not always easy because no matter what, politics will always catch you at some point. The difference is that we don’t perceive it as an insurmountable obstacle, but as a step to find other ways and connect with people highly motivated to build something together with you”.

On the paper, I am a pure product of the French scientific higher education system. The last seven years were mostly dedicated to my old passion: aviation. Although I did not practise only aviation during these years, it was the ultimate goal. Yet progressively, I realised that it was not the field I was gonna be in. What about nature? History and languages? What about living abroad? After my thesis, I missed giving something of me to others. I was thirsty of exploring new paths, setting up useful projects with people striving for the same objective. As I finally graduated, I had no constraints, nothing. I was free. What an occasion. I jumped to my laptop and began my search. I quickly found GAIA’s offer and I applied right away. Often people ask me “why Kosovo?” Well, because it is a place not so far from home about which I knew nearly nothing. Plus, the history of the region reminded me the history of my native region, Alsace, that was fought between France and Germany for centuries.

Some weeks later, I was taking a bus to Budapest with a nearly-unknown colleague, Célia, in the middle of the night. Off we go. Later on, in the bus to Belgrade, I can remember lying down, my body on two seats and my legs across the aisle. I was wondering where I was going to and if I wasn’t crazy. It made me smile: of course I was a bit afraid – but I knew I was on the right way. On the path to an adventure I would not forget. As we arrived in North Mitrovica, I was immediately struck by the atmosphere. It was night. It was cold. There was a demonstration, there was shouting, there were the Carabinieri patrolling. Is this what it looks like? The big Yugoslavian buildings were overwatching us as we  progressed towards our home. Some kind of majesty was emanating from them. Nice introduction.

I could never have imagined a city like Mitrovica. Yes, there are scars from the 1999 war. There are many, as in the whole country. Yes, it has a lot of ruins and it is being rebuilt somewhat anarchically. Yes, it lacks efficient public transport and it is polluted. Yes, many people want to leave. But still. There is this unique geography and atmosphere. Two worlds that were once one, now living separate on the two sides of the river. The Roma and Bosnian districts. These unique neighbourhoods where one can find small, winding streets that will take you to a building, a garden, a mosque or a church, an old house that you would never have thought it was there. This typical Yugoslavian monument “To the minors of Trepça” overlooking the city. These buzzing streets and cafes. This constellation of young people attached to their place and getting involved in projects from NGOs, schools, universities, cultural centers and galleries. That’s it: Mitrovica is full of life.

From the setup of the garden at our place to the one on the rooftop of 7 Arte, from organizing conferences to coordinating workcamps, from helping on the other programs of GAIA to discovering Kosovo, Serbia and Albania, I can say that my wishes of discovery and adventure have been fulfilled. It was a pleasure meeting the people that make up GAIA, working with them and learning from them. There were ups and downs and adaptation took some time. But I can only seek for such an adventure to start again, here or elsewhere, somewhere… Dear friends from GAIA and from Kosovo, keep up the good job, and see you one of these days.