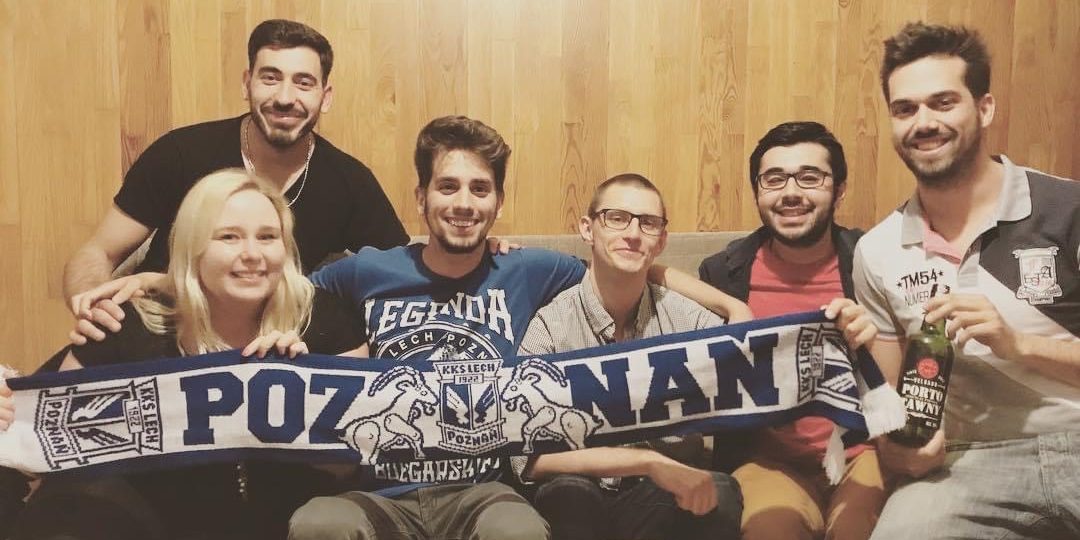 My name is Gjergj Markaj. I am from Kosovo, currently living in Poland. Three years ago, I remember I started a journey, I made a decision which today I think it was one of the smartest I ever did. It was called European Voluntary Service (EVS).

Nothing was planned from me. I heard of volunteering from a Polish volunteer whom I met in Prishtina, her name is Barbara, and I must say that today she is my wife and the rest is just the best history which I have been through. Barbara and her friends were volunteering in Skopje. I participated in some of their workshops there and of course I got to know them much better, as well as their purpose and their ideas. No doubt, I liked the idea of volunteering very much. Living abroad, meeting new people, having new experiences… this is something that would attract any young person, especially youth from Kosova.

As we all know, unfortunately Kosova is quite isolated, and it is very hard for a young person to travel abroad. Almost impossible I must say. So, mostly we enjoy the world only through Internet or television. My friends and especially Barbara were motivating me so I decided to do something concrete about it. I found support in both organisations: GAIA in Kosova and One World Association I Poznan in Poland. But of course, like for everyone with Kosovan citizenship, we need visa in almost every step we make so it was was pretty hard until we made everything together to apply for visa but in the end it fortunately I had a green light from Polish Embassy, and then I had to prepare myself for a different life.

1st November 2017 found me in Poland. I was lucky, since in the office very nice people were waiting for me, who helped me a lot during my volunteering period. For me as a Kosovan, Poland was not another country, it was totally another world. Much different language from I used to hear, different traffic, culture, different architecture, different people. It took me a while to be on the right track there but there is a beauty of this hole idea, that we should try, that we can help but we also need the help of someone else no matter from which side of those borders you are.

During one year in Poland I learned a lot and not only about the world and people around me, but about myself too. I was living with a Turk in the same apartment and working or meeting with people from every corner of the globe. I also used this time to travel and to see more places. Getting to know the people, listening to their experiences and comparing with yours, it gives you a really good way to grow up as a person. It helped me to watch the world from different perspective than I used to. Not only in Kosovo but surely in all Balkan countries people hate each other depending on which side of the border you are, which religion you belong to or which language you speak. I believe that the best things I learned during my voluntary life was to not judge anyone basing on what I just mentioned. I learned that we all are human and race, ethnicity, religion etc., they just can make us better if we want to use them in a good way, if we are willing to change our way of thinking.

I found EVS was a great way to make us live and cooperate with each other no matter our differences. Our differences gave us more strength and made us better in what we had to do because we wanted to work and live in the spirit of tolerance and equality. I am not saying that we should forget our history. We know that especially in the Balkan we had very painful times. A lot of wars that brought a lot of deaths and a lot of destruction, physical and psychological. We have to remember our history and to remember what consequences we have today from an older generation and we, the youth, should start to build together that what was destroyed in past.

I really would recommend to every young person to, once in his or her lifetime, try volunteering and live abroad. It is such a good way of getting to know yourself and the world, to be independent and to think with your own head for your own life and for the good of the society around you.

The Greenbelt Camp – An ESC testimony by Qendresa
October 18, 2021